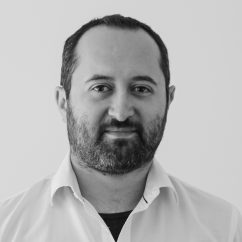 Responsible for design development, design coordination and project management, Sasha works with the Design Director to develop the conceptual approach to the project and acts as an intermediary between the Design Director and the project team. In this role, he ensures that the designers’ vision is maintained from conceptual premise to completed construction. Sasha’s strongest contributions lie in his aim to translate the Client’s needs, ambitions and aspirations into intelligent and creative design. At Clive Wilkinson Architects, Sasha has contributed to projects such as the UCLA School of Theater, Film, and Television, two award-winning projects for Macquarie in London and Sydney, and the new headquarters for Intuit in Mountain View, California. He received his Bachelor of Architecture from Cornell University in Ithaca, New York.