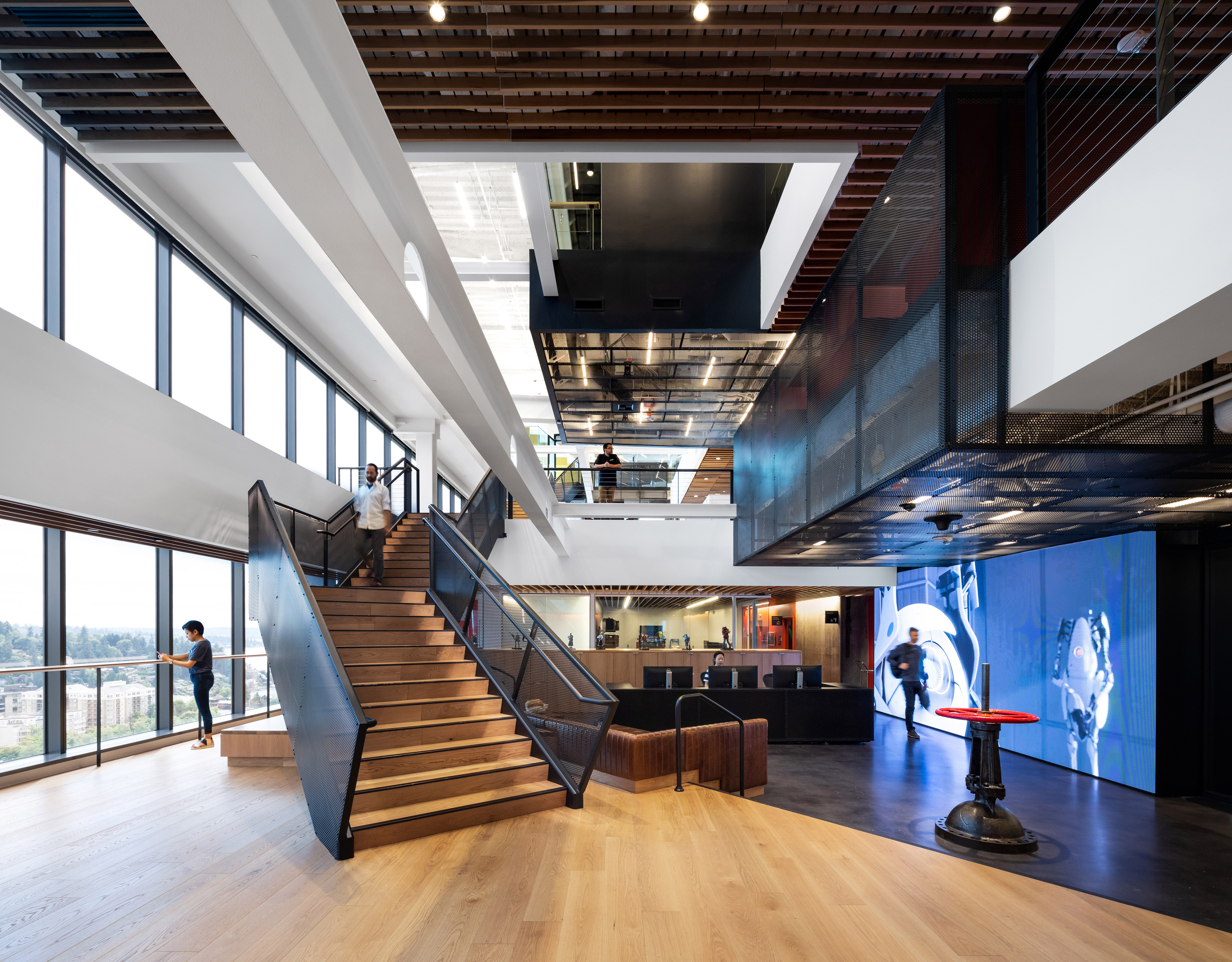 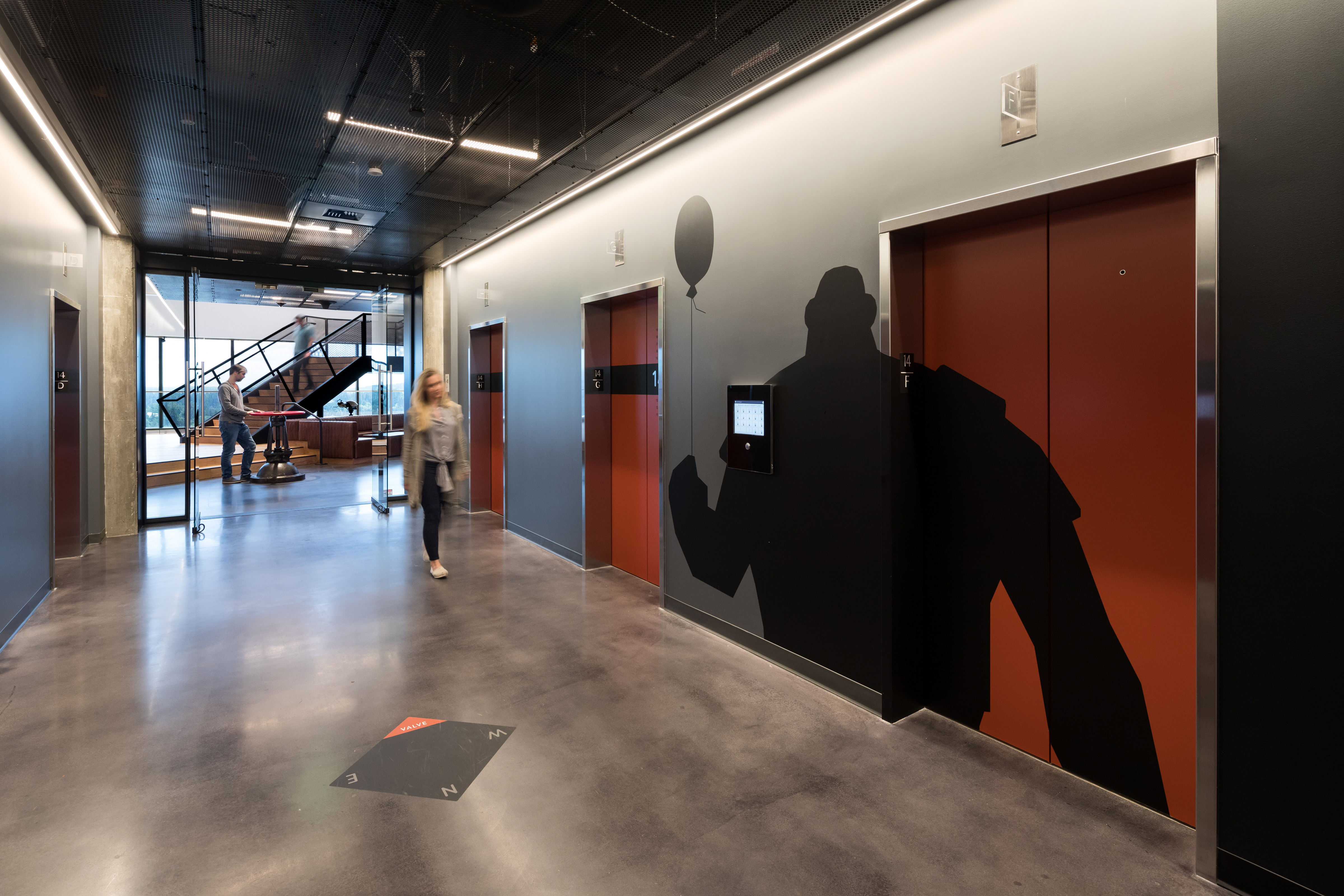 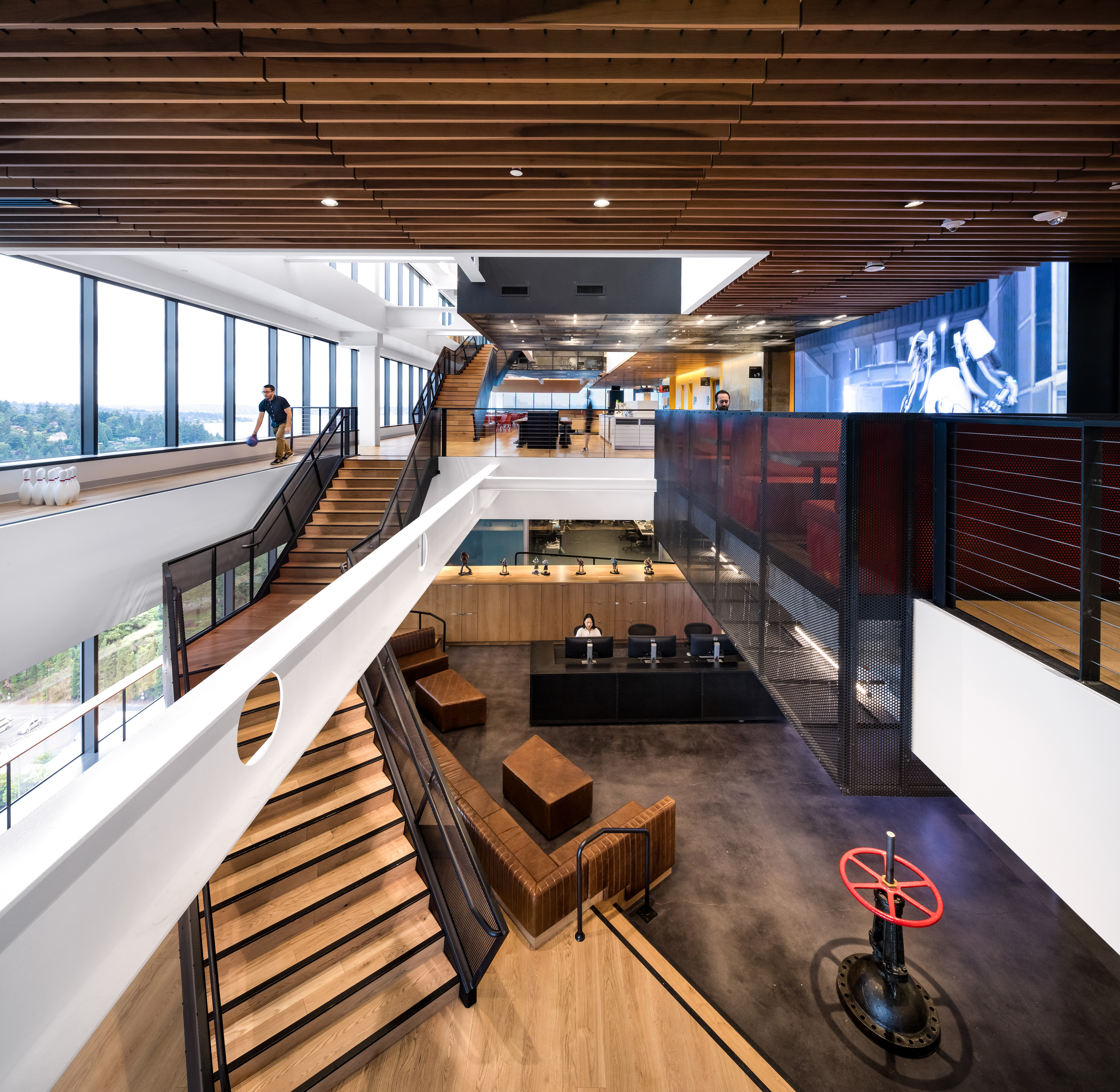 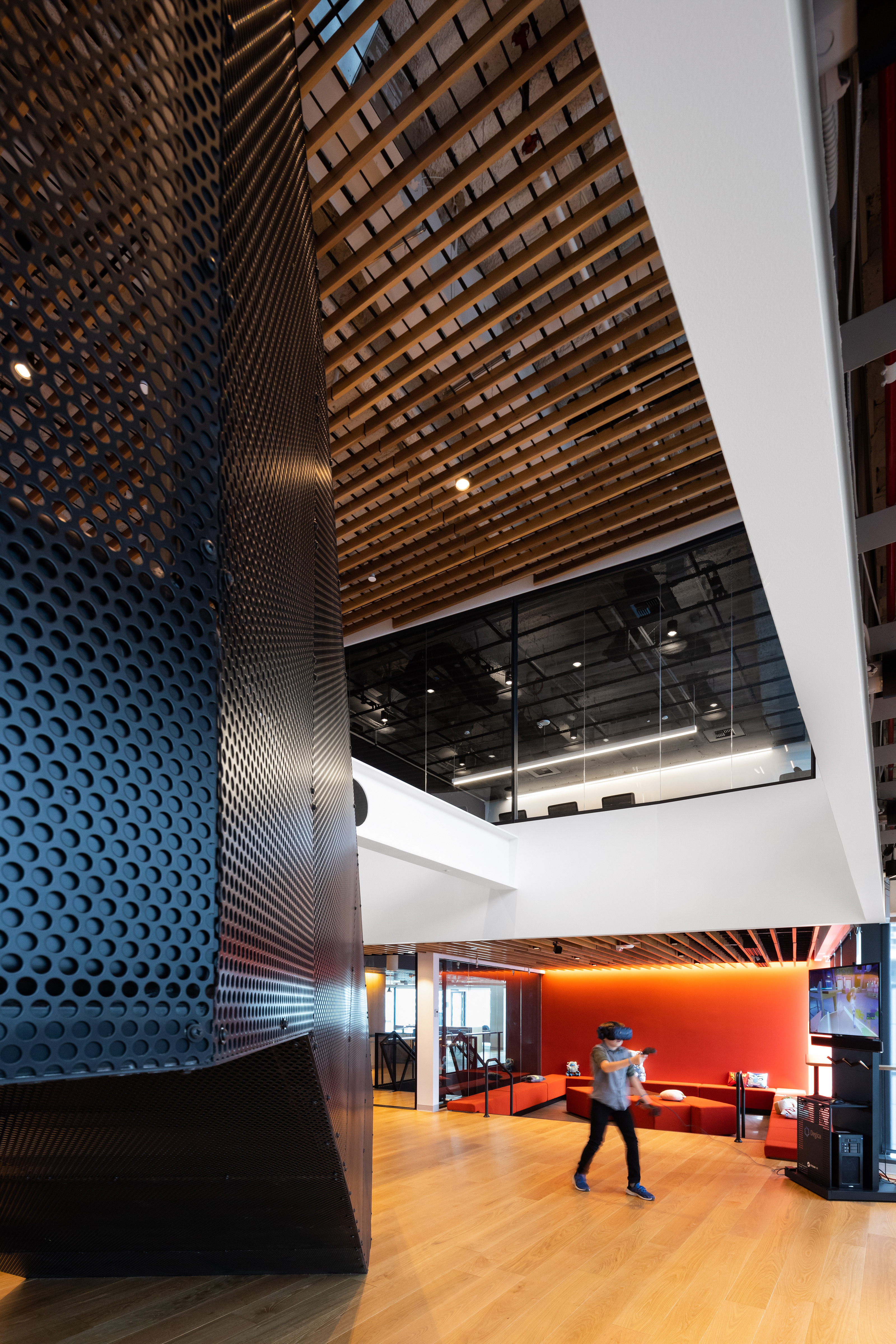 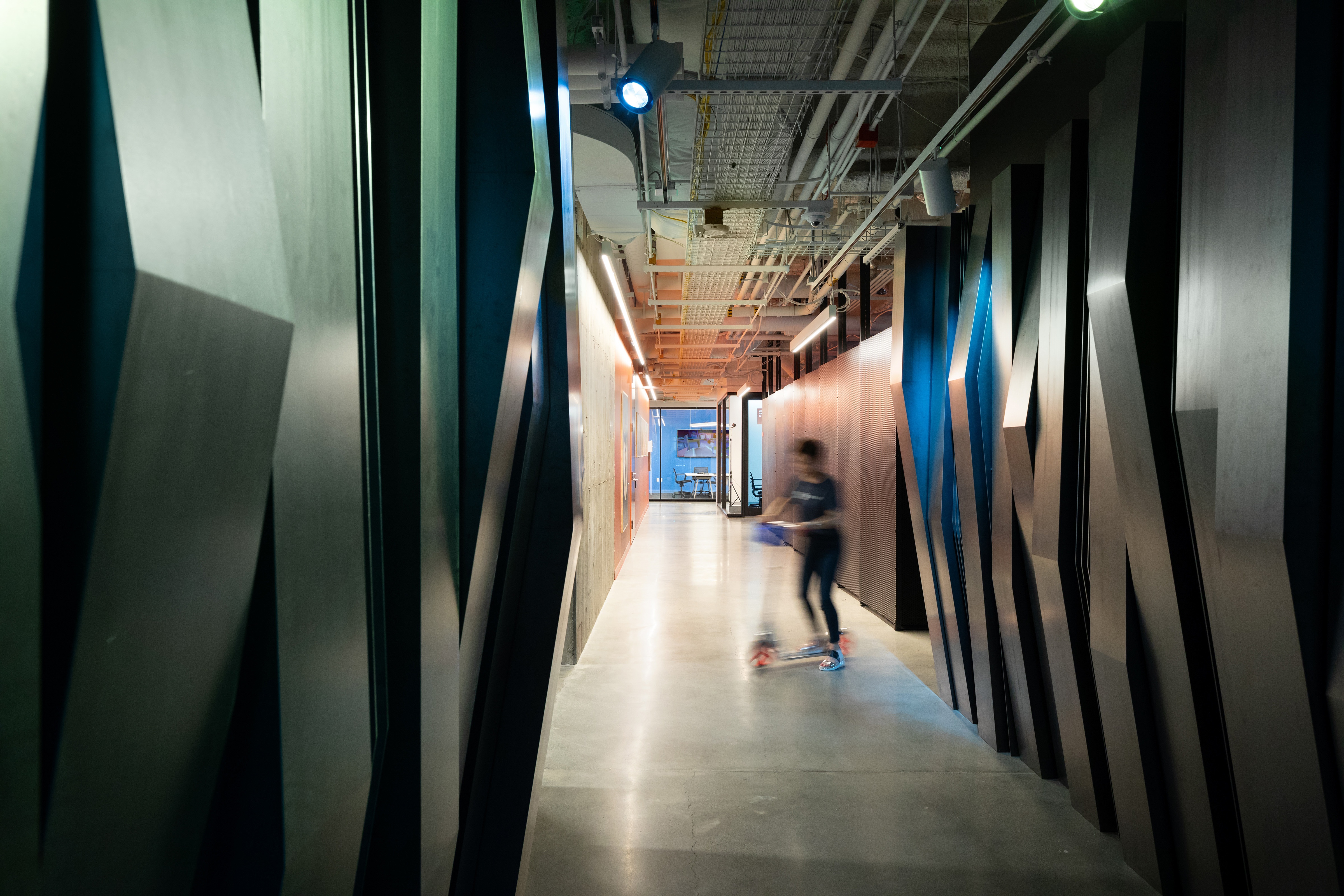 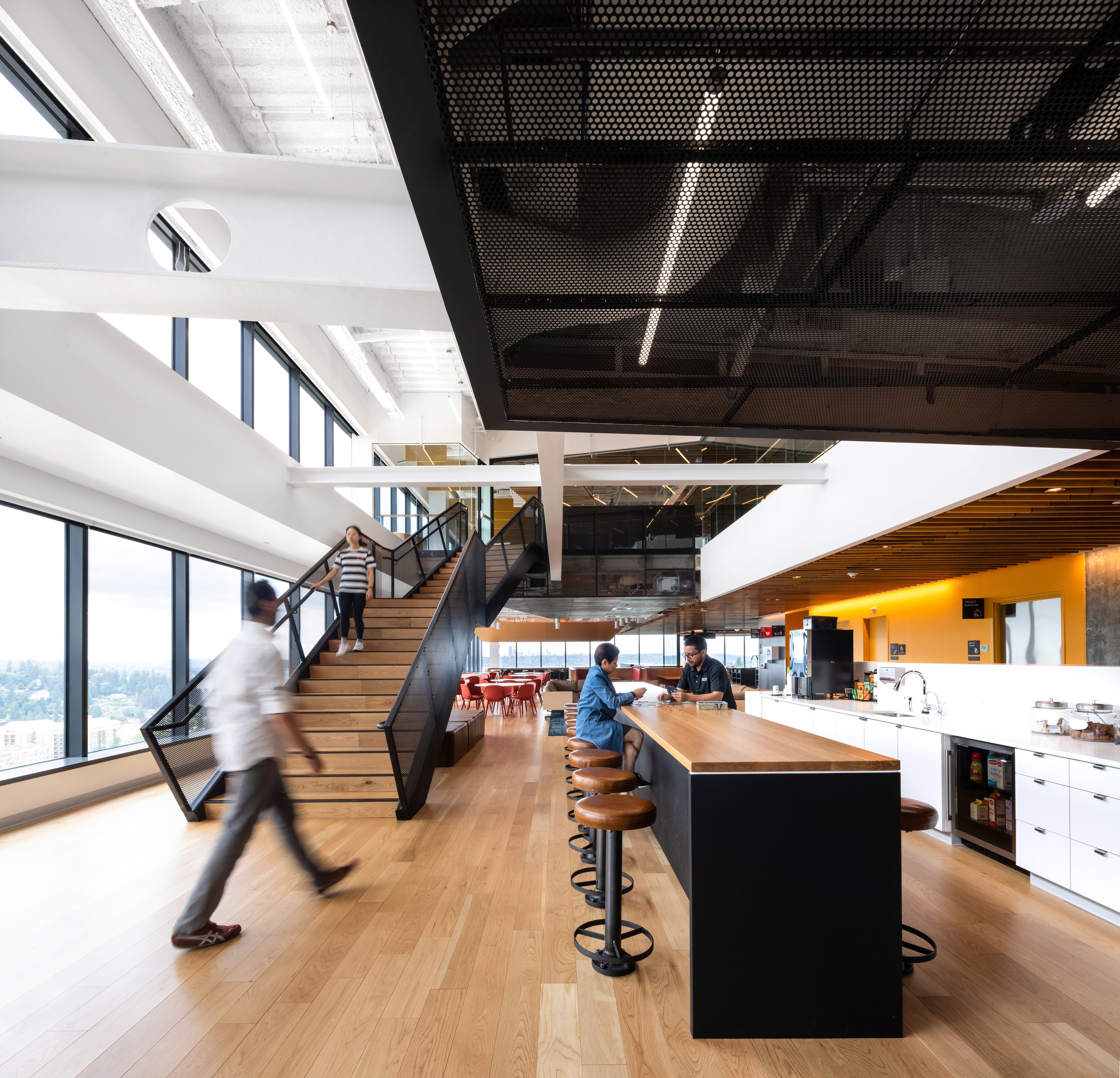 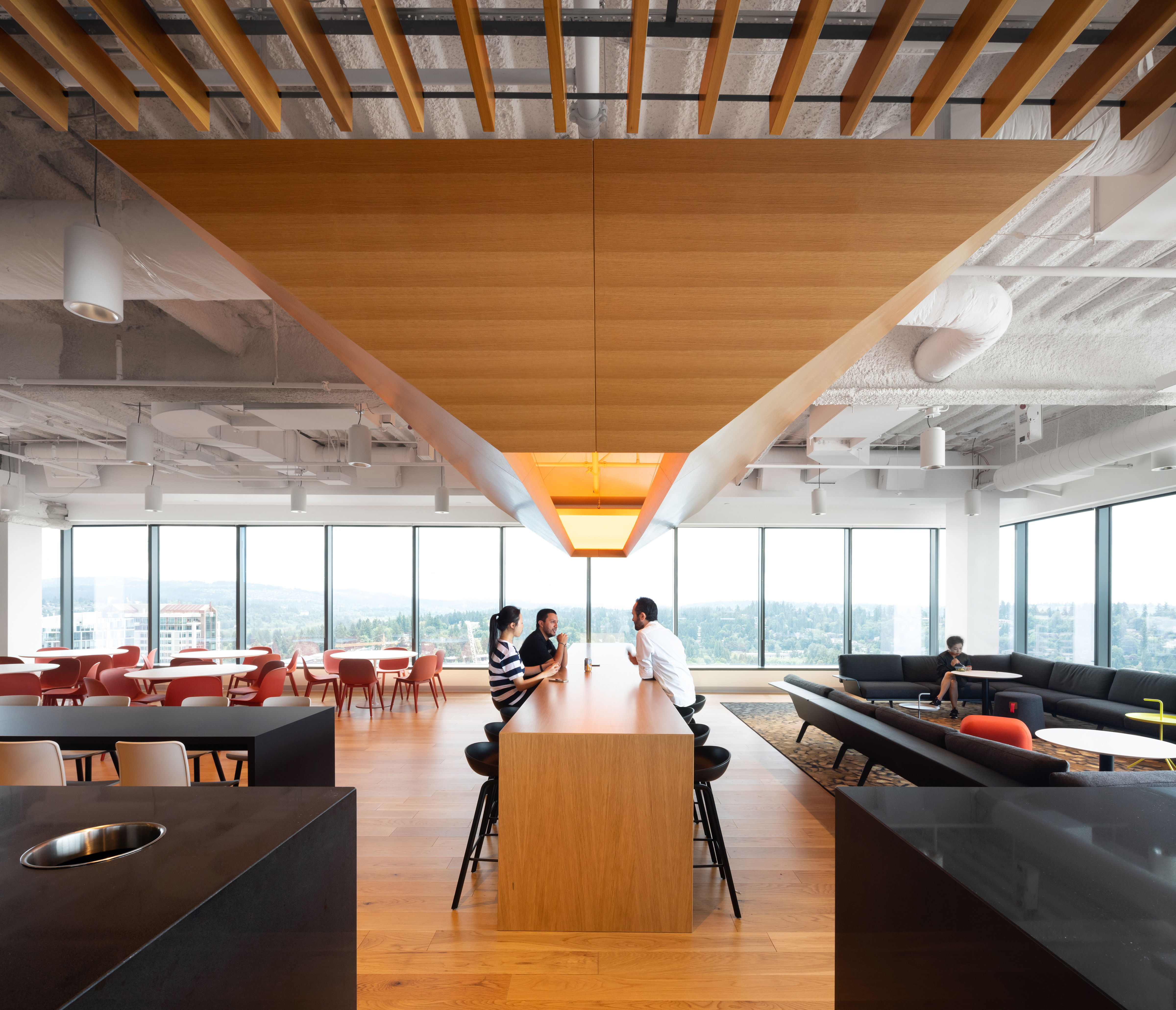 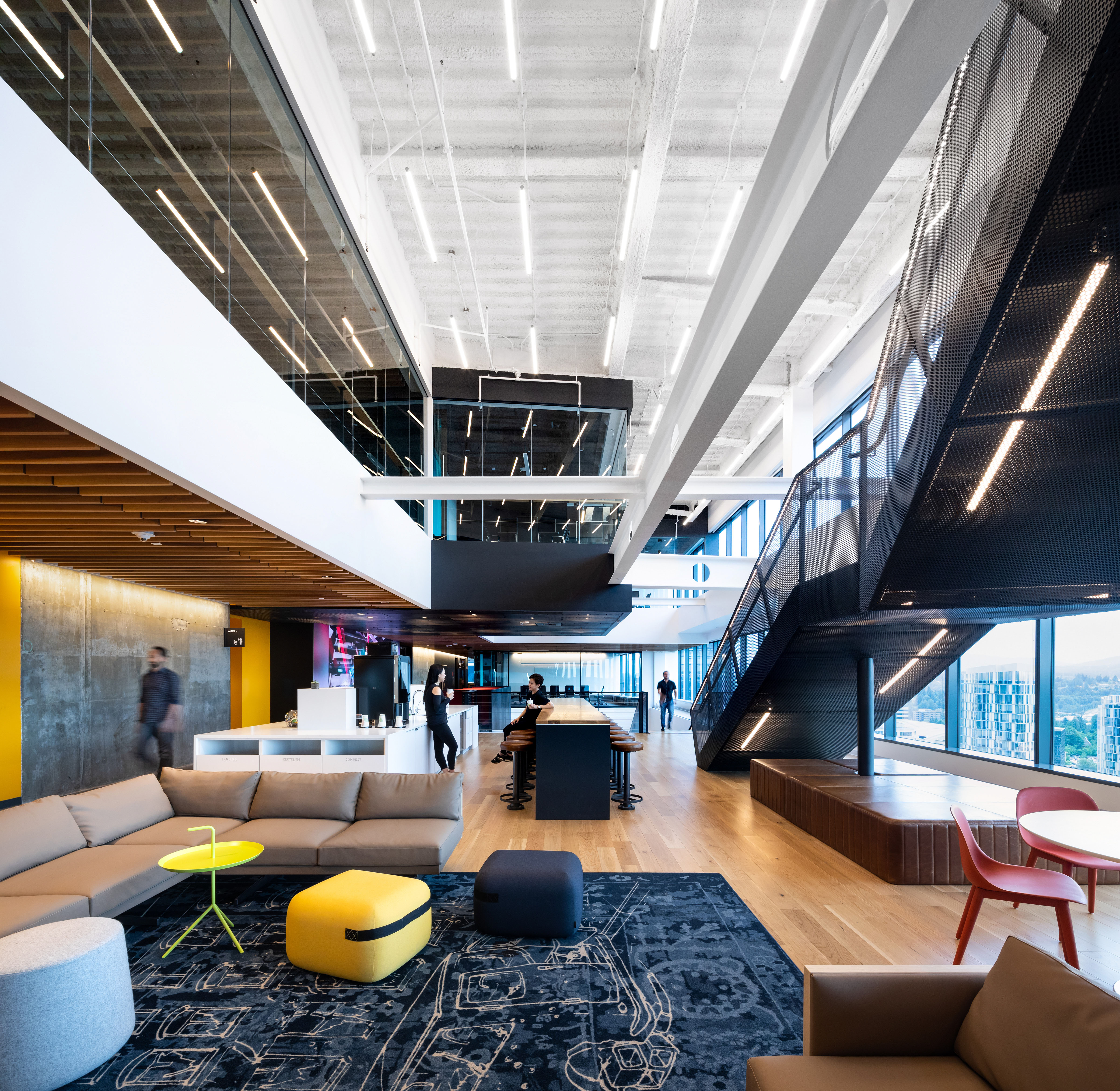 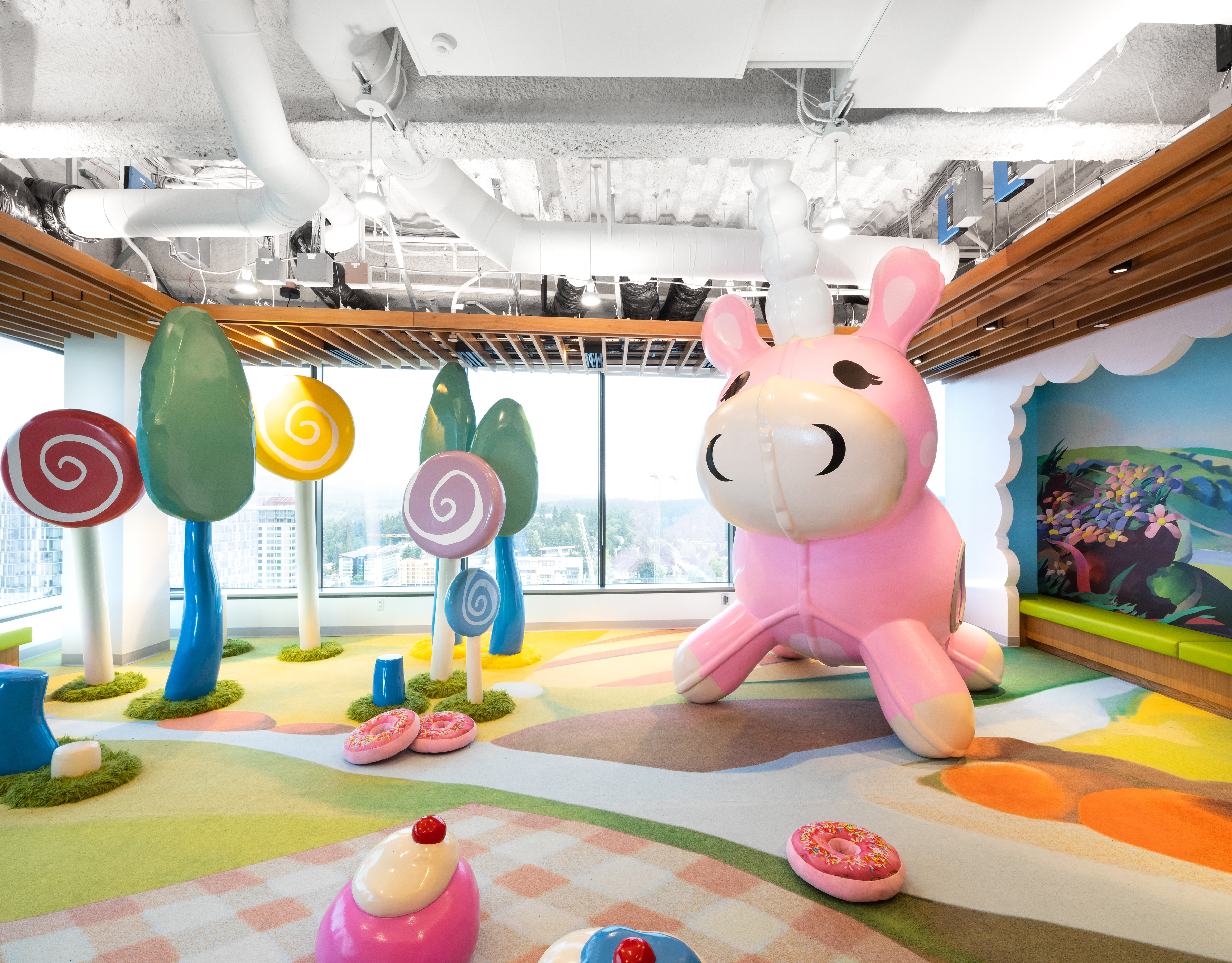 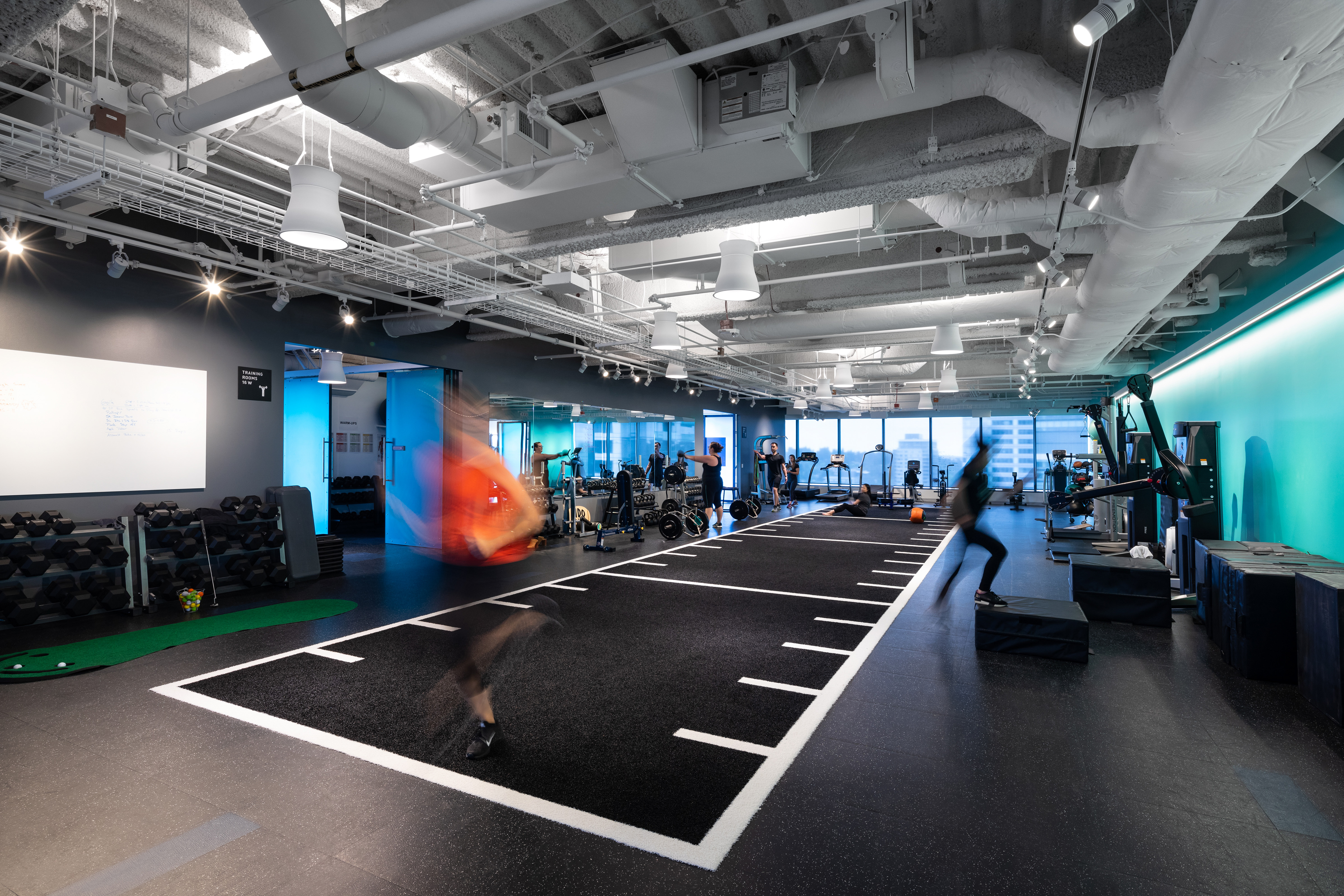 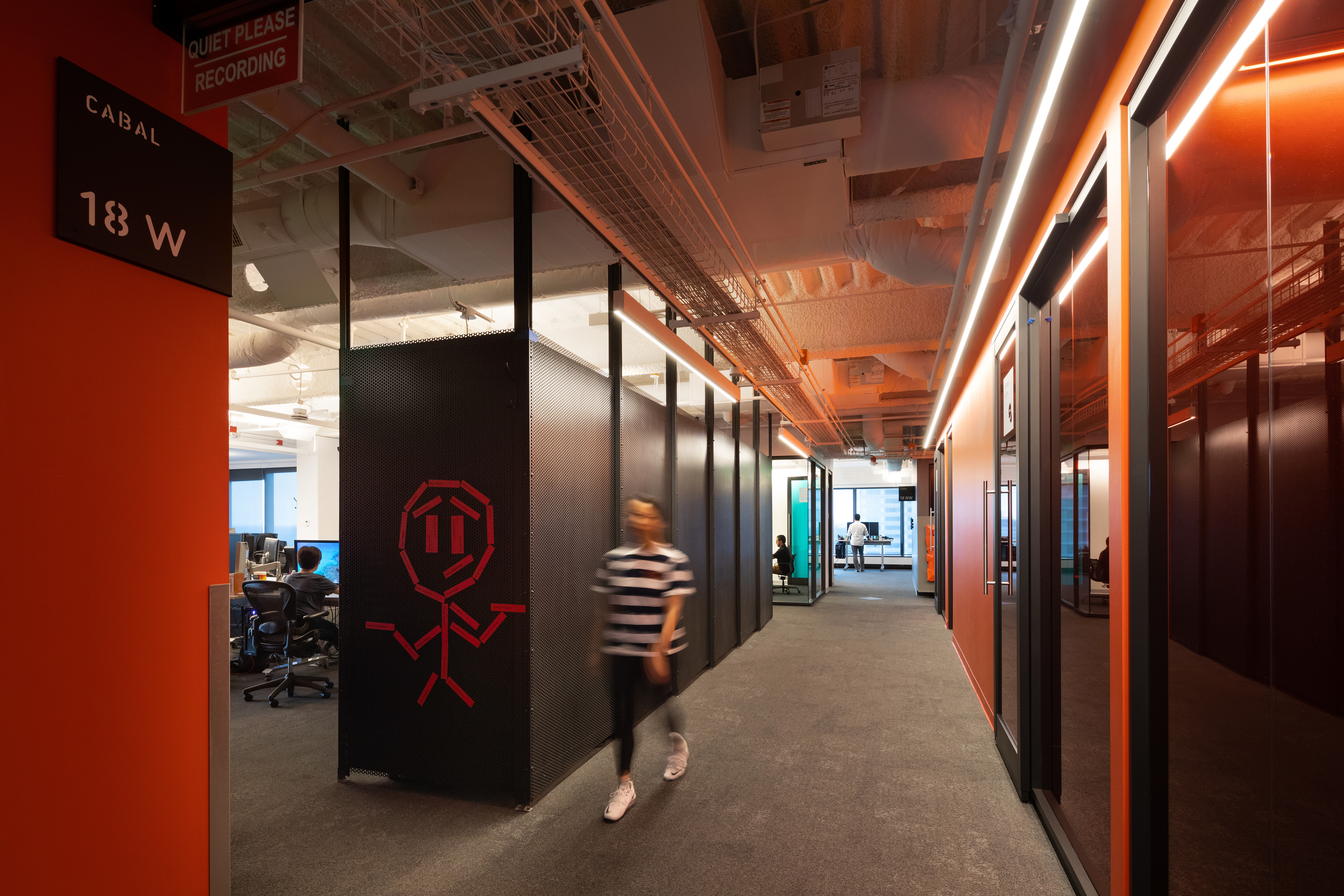 Valve’s new headquarters in Bellevue, Washington, consists of 135,500 square feet of office and amenity space spanning 9 contiguous floors for 500+ employees. The company’s steady growth, in addition to their recent expansion into VR (virtual reality) and hardware development, prompted the popular video game developer to relocate to the newly completed Lincoln Square, a 31-story mixed-use development just down the street from their previous offices. Working together with a Bellevue-based Executive Architect, JPC Architects, the Design Team implemented a dynamic design solution that incorporated flexible, open workspace for the company’s software and hardware departments with a cafeteria, café spaces, gym and shower facilities, audiovisual editing suites, a merchandise display room, a motion capture room, and various family play areas and rooms.

Building from Valve’s deep-rooted cabal system of self-organized, multidisciplinary project teams, the workplace is supported by a variety of open and enclosed collaboration spaces. Cabals combine dedicated meeting spaces with semi-enclosed work pods that provide additional privacy for ‘heads-down’ work. More importantly, the circulation path supports the free flow of work-desks-on-wheels, as software developers regularly move between the cabals. In response to developers’ inclination to work in the dark, the Design Team sought to employ the central core not only as a secondary source of soft illumination but also as a means of connecting the office to itself and to the outside world. The ‘inner glow’ from the continuously lit core walls highlight the shared circulation path on the cabal floors with level-distinguishing color palettes to augment wayfinding.

Connecting feature stairs provide a direct route from hardware cabals on the lowest floor to software cabals at the highest level. Just as the central core concept provides more intimate and subtle experiences where workspace is positioned while expanding its scale and reach at the communal spaces, the connecting stairs are compact at the extremities and stretched out at the central amenity floors. The floor openings at the south perimeter curtain wall draw in three stories of natural light to reveal expansive views of Bellevue, Seattle and the greater Pacific Northwest.